Christmas may seem like a distant memory but the environmental effect of the annual consumer frenzy, over-indulgence and extravagance is lasting damage. And year on year the cost to the planet grows.

For the best part of a week in early January the street in which I live in London was littered with mountains of rubbish and discarded Christmas trees, real and fake. The use of both live and artificial trees as decorative emblems of Christmas is ecologically damaging and, like many aspects of this materialistic pantomime, needs to be consigned to a bygone era and replaced with either a naked corner, or a rented potted tree from a garden center, which can be returned to the growers afterwards.

In Europe an estimated 60 million live trees are bought, decorated and dumped; it’s around 30 million in America.The majority of real trees are grown specifically for Christmas so forests are not being depleted, but after the festivities most real trees are thrown away andas they decompose, methane (a greenhouse gas) is produced. Artificial trees leave their own carbon footprint due to their production and transportation. Most are made in China and amass a great many polluting air miles on route to their Western destination, and when discarded also end up in landfill sites. In order to make up for the amount of energy used in its production, accordingto The Woodland Trust, a plastic tree would need to be reused every Christmas for twenty years. Under the tree of course is to be found the Festive Icons – the presents. Worldwide, adults are said to spend on average $475 on gifts, half of which are unwanted,but in this throwaway world of ours, instead of returning them, most of these rejected trinkets are dumped in the rubbish bin and end up in a landfill site.

Christmas and rubbish are synonymous terms in more ways than one. It’s the time of year when the largest amount of consumer waste is produced and the overwhelming bulk it ends up in a hole in the ground. Over 114,000 tons of plastic waste is estimated to have been produced in Britain over Christmas and not recycled, together with “more than 88,000,000 Sq. m of wrapping paper and 300,000 tonnes of card packaging”, The Times relates. In the Capital of Consumerism, America a colossal $10 million is spent on wrapping paper, most of which is not recyclable, and the number of Christmas cards sold requires 300,000 trees to be cut down.

Then there’s the unbridled cruelty reserved for the animals that are raised for the festive table; around 10 million turkeys are eaten in Britain; its closer to 25 million in America, where the major turkey cull is Thanksgiving. The vast majority of birds stuffed and roasted are factory farmed. Their short lives are spent in appalling conditions and end when they are plunged head first into electrified stunning baths, after which they have their throats cut in the slaughterhouse. The industrial farming of turkeys is not just barbaric, like all animal agriculture it produces huge amounts of the greenhouse gases which fuel man-made climate change. Add in Christmas travel by road and air and the enormous environmental impact of Christmas begins to become clear: from 15th December to 4th January a record 52 million people in America took to the air and 97 million hit the highways. In Britain over thirteen million vehicles clogged the roads in the days leading up to the Big Day, and both Heathrow and Gatwick airports had their busiest days on record: around four million people in total, with record numbers taking long-haul flights. Aviation is a major source of greenhouse gases, and the further one flies the greater the environmental damage. 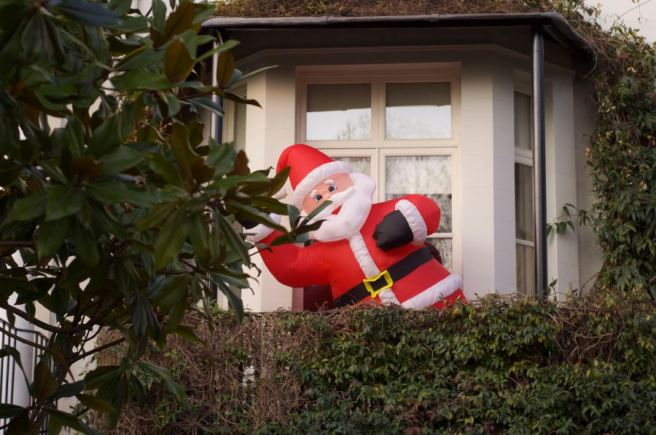 Whilst the festive period allows much needed time for rest, and for some, warm family gatherings  (tense misery for others), in its current form it is little more than an exercise inmass consumerism. The ‘Christmas Spirit’, which suggests peace, brotherhood and ‘goodwill to all men’, is widely absent, replaced by an exaggerated version of how life is conducted the rest of the year; contemporary values(which are not values at all of course) of greed and selfishness are relentlessly encouraged and to a large degree, prevail.

The ‘consumer culture’, of which Christmas is the pinnacle expression,is an essential part of the Neo-liberal economic system under which we live. It is maintained by insatiable desire and the false notion that happiness is to be found within the Christmas wrapping paper, the Black Friday Deals or Saturday shopping outings, in ‘success’and sensory pleasure. However, far from creating the conditions in which contentment and joy can flower, discontent and conflict is maintained,and an atmosphere created for anxiety and depression to grow. As it is currently constituted, Christmas perpetuates and strengthens thismaterialistic and highly damaging approach to life – for humanity and the planet. Like much of contemporary living it needs to be simplified and re-defined, not necessarily in a way that corresponds to Christian doctrine, but in a manner rooted in what we might more broadly call ‘spiritual’, or simply human values: sharing, social/environmental responsibility, tolerance and kindness to one another and, crucially, the Earth itself.

A treeless, gift-free Christmas, where little or no travel is involved, and money usually spent on gifts is donated to an environmental charity, would be the ideal. If you can’t face Christmas without presents, then environmental considerations should be paramount when choosing what to ‘give’ –not necessarily what to ‘buy’. If we are to overcome the environmental catastrophe and reverse the colossal ecological damage, greed, selfishness and excess must come to an end, replaced by Simplicity and Sufficiency – and a new environmental consciousness urgently cultivated, at Christmas and throughout the year.

View all posts by Graham Peebles